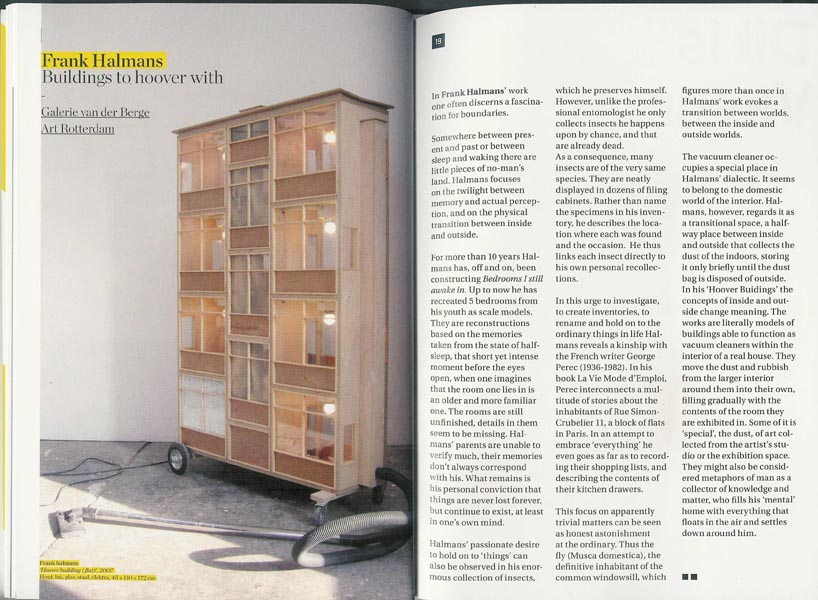 Frank Halmans 'Buildings to hoover with.'

In Frank Halmans' work one often discerns a fascination for boundaries.
Somewhere between present and past or between sleep and waking are little pieces of no-mans land. Halmans focuses on the twilight between memory and actual perception, and on the physical transition between inside and outside.
For more than 10 years Halmans has, off and on, been constructing Bedrooms I still awake in. Up to now he has recreated 5 bedrooms from his youth as scale models. They are reconstructions based on the memories taken from the state of half-sleep, that short yet intense moment before the eyes open, when one imagines that the room one lies in is an older and more familiar one. The rooms are still unfinished, details in them seem to be missing. Halmans' parents are unable to verify much, their memories don't always correspond with his. What remains is his personal conviction that things are never lost forever, but continue to exist, at least in one's own mind. Halmans' passionate desire to hold on to 'things' can also be observed in his enormous collection of insects, which he preserves himself. However, unlike the professional entomologist he only collects insects he happens upon by chance, and that are already dead.
As a consequence, many insects are of the very same species. They are neatly displayed in dozens of filing cabinets. Rather than name the specimens in his inventory, he describes the location where each was found and the occasion. He thus links each insect directly to his own personal recollections. In this urge to investigate, to create inventories, to rename and hold on to the ordinary things in life Halmans reveals a kinship with the French writer George Perec (1936-1982). In his hook La Vie Mode d'Emploi, Perec interconnects a multitude of stories about the inhabitants of Rue Simon-Crubelier 11, a block of flats in Paris. In an attempt to embrace 'everything' he even goes as far as to recording their shopping lists, and describing the contents of their kitchen drawers.
This focus on apparently trivial matters can be seen as honest astonishment at the ordinary. Thus the fly (Musca domestica), the definitive inhabitant of the common windowsill, which figures more than once in Halmans' work, evokes a transition between worlds, between the inside and outside worlds. The vacuum cleaner occupies a special place in Halmans' dialectic. It seems to belong to the domestic world of the interior. Halmans, however, regards it as a transitional space, a half-way place between inside and outside that collects the dust of the indoors, storing it only briefly until the dust bag is disposed of outside. In his 'Hoover Buidings' the concepts of inside and outside change meaning. The works are literally models of buildings able to function as vacuum cleaners within the interior of a real house. They move the dust and rubbish from the larger interior around them into their own, filling gradually with the contents of the room they are exhibited in. Some of it is 'special', the dust of art collected from the artist's studio or the exhibition space. They might also be considered metaphors of man as a collector of knowledge and matter, who fills his 'mental' home with everything that floats in the air and settles down around him.