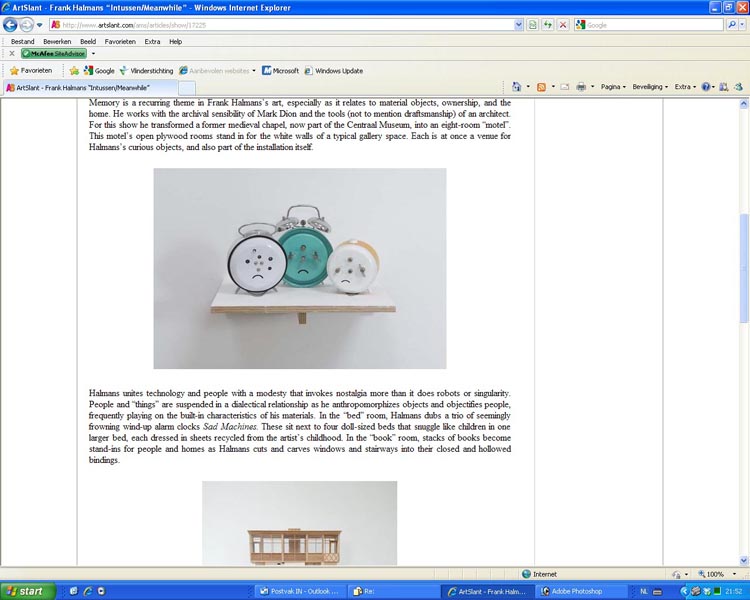 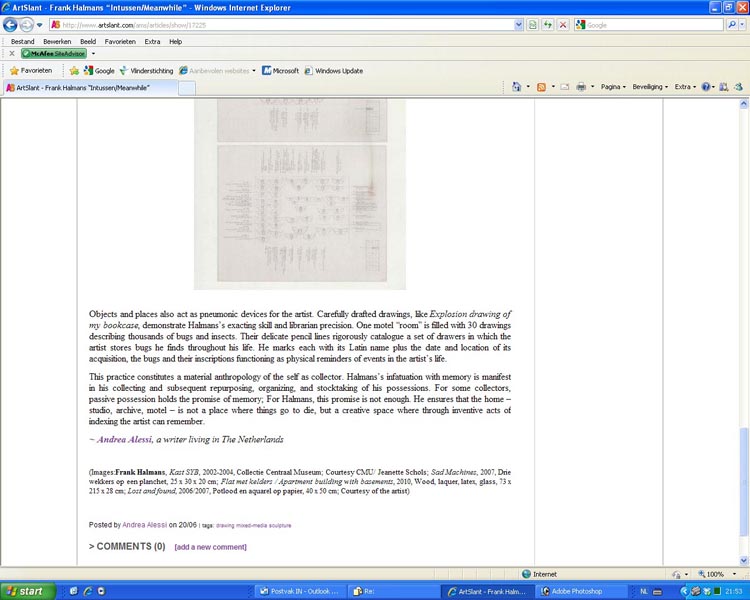 Memory is a recurring theme in Frank Halmans”s art, especially as it relates to material objects, ownership, and the home. He works with the archival sensibility of Mark Dion and the tools (not to mention draftsmanship) of an architect.
For this show he transformed a former medieval chapel, now part of the Centraal Museum, into an eight-room motel. This motel”s open plywood rooms stand in for the white walls of a typical gallery space. Each is at once a venue for Halmans”s curious objects, and also part of the installation itself.
Halmans unites technology and people with a modesty that invokes nostalgia more than it does robots or singularity. People and 'things' are suspended in a dialectical relationship as he anthropomorphizes objects and objectifies people, frequently playing on the built-in characteristics of his materials. In the 'bed' room, Halmans dubs a trio of seemingly frowning wind-up alarm clocks Sad Machines. These sit next to four doll-sized beds that snuggle like children in one larger bed, each dressed in sheets recycled from the artist”s childhood. In the 'book' room, stacks of books become stand-ins for people and homes as Halmans cuts and carves windows and stairways into their closed and hollowed bindings.
Halmans”s habitats are for (and about) himself and others. He creates models for unfeasible spaces that are at once practical and absurd, often coupled with a preoccupation with storage, cleanliness, and organization. For example, Block of flats with cellars is a multistoried apartment building in which each apartment has its own darkened 'cellar' on alternating floors. In a continuing series fashioned from dustbusters and vacuum cleaners, Halmans transforms the interior cavities of these machines into miniature houses styled on unadorned mid-century architecture. In these theoretical dwellings private spaces become storage units for refuse. Perhaps the internal collection of dust appeals to the collector in Halmans himself, standing in for the things we accumulate over our lifetimes. Objects become a part of us, represent us, in the acquisitive process that is life. If Halmans makes any judgment about our collective impulses, it is only to say that they are human.
Objects and places also act as pneumonic devices for the artist. Carefully drafted drawings, like Explosion drawing of my bookcase, demonstrate Halmans”s exacting skill and librarian precision. One motel 'room' is filled with 30 drawings describing thousands of bugs and insects. Their delicate pencil lines rigorously catalogue a set of drawers in which the artist stores bugs he finds throughout his life. He marks each with its Latin name plus the date and location of its acquisition, the bugs and their inscriptions functioning as physical reminders of events in the artist”s life.
This practice constitutes a material anthropology of the self as collector. Halmans”s infatuation with memory is manifest in his collecting and subsequent repurposing, organizing, and stocktaking of his possessions. For some collectors, passive possession holds the promise of memory; For Halmans, this promise is not enough. He ensures that the home  studio, archive, motel  is not a place where things go to die, but a creative space where through inventive acts of indexing the artist can remember.